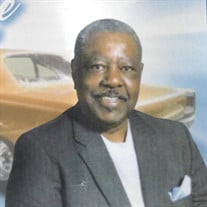 WC Roberson was a man of few words-and those words were usually jokes or humorous comments to and had his own way of showing it. One way or the other, he always kept his family smiling. He didn't show his love in the traditional way, but then again, his name was we from the beginning there was nothing traditional about him. A buckee da buckee da buckee da boo! Till this day, nobody knows what it meant. But when he bounced his grandchildren on his knee and those words danced out of his mouth, the wide grins across his grandchildren's faces were all that mattered to him. Yes, it was true, when everyone came to visit, it was Shirley that was front and center. She was the one out in the open, taking care of the grandchildren, entertaining guests both young and old. He was usually somewhere in the yard or working on his classic Road Runner (vehicle) he kept in the garage. We know that internal organs aren't seen, but they are vital to the body. He became those internal organs for his family. Working behind the scenes when nobody else could see what he was doing. Sliding money in his children's bank accounts, fixing cars when they broke down, and giving advice to make sure we avoided as many mistakes as possible along the way. He didn't poke his chest out or sound an alarm when he did it, he moved in silence-and love. He was a man's man, working with his hands to provide for his family. The grandchildren remembered what was affectionately known as "big blue." A conversion van that would not only carry his children around, but his grandchildren as well. He wasn't the type to say how much he loved his family. He was the type that showed how much he loved his family. Actions carry weight and sometimes words can be empty. So, unless he was trying to "buss a cap" one of his many sentiments towards two of the granddaughters (Tasha and Kieara) LOL he knew the true meaning of loving his family, not just with words but with actions, strength, and patience. It is our hope that we can all love in some small way just as he did. we Roberson, was born on October 18, 1940, to the union of Randolph and Katie Roberson; Altheimer, AR. He received his formal education and graduated in 1959 from, Altheimer High School; Altheimer, AR. He accepted Christ at on early age and attended Ellison Baptist Church, in Ellison, AK., with his family. There, he also served on the usher board. After high school he moved to Chicago, IL, and resided with his Aunt and Uncle (Mamae and OT). From there, he relocated to Milwaukee, WI in 1961. On August 21,1962, he married Shirley Rodgers; to this union six children were born. In 1961, WC started his career with Cudahy Tannery in Cudahy, WI. He worked as a welder and was later promoted to Supervisor. He remained a dedicated employee for 35-years until his retirement in May of 1996. He was also a business owner and enjoyed traveling. He spent his spare time working on his pride and joy; his 1967 Roadrunner Vehicle. He enjoyed driving and later become a school bus driver for Lakeside Bus Company, until his health no longer allowed him to work. That, however, didn't stop him from doing what he loved. If you needed a ride, he was going to get you there. His passion for cars let us know that anytime we needed advice for a car repair we could pick up the phone and call Dad, we knew his advice was solid. WC Roberson transitioned from this life to his eternal life, Tuesday, February 16, 2021. He leaves to cherish his memory: his Daughter, Sherral (Darrell) Dulaney Sr. of Arlington, TX; Sons, Gory Roberson, and Troy Roberson; Daughters, Zantrice Peters, Teneisha Roberson, and his Daughter-in-Love; Cathy Roberson, all of Milwaukee, WI. The Mother (wife) of his children Shirley Roberson, Arlington, TX. 17 Grandchildren: Latasha (Johnathan) McCray, Tyran (Musie) Saffold Jr.. Darrell Dulaney Jr. of Arlington, TX.; Sherrell (Diontae) Harris, Demetruis Roberson, Antonio Roberson, Camille Roberson, Tisha Brookshire, and Darshae Roberson, of Milwaukee, WI.; Troy Roberson and Toya Roberson, of Atlanta, GA; Kieara (Quentin) Griffin, Malonda Peters, Stephanie Show, Trevion Tharp, Diontae Tharp, and Diajiah Tharp, of Milwaukee, WI. Extended Grandchildren; DeAnthony Dulaney, Alexis Dulaney, and Mayo Dulaney of Mobile, AL; 14 Great Grandchildren: Touri. Noelani, Joyce, Oliana, Kalina, Durrell, Layla, Jayden, Jamirrah, Miracle, Koi, Braylin, Coby, and Kimani; 4 extended Great Grandchildren, Jazz, Anthony, Sonia, and Danielle; Brother, Luster Robinson of Chicago, IL; Cousin/Brother, Clifton Lee Sr., of Milwaukee, WI; two special sons, Dock Peters, and Cory Smith of Milwaukee, WI; special daughter, Eraka Kilgore of Atlanta, GA; sister- in-low, Zenobia Perkins; brother-in-law, Randall Rodgers Sr. of Milwaukee, WI; a host of nephews, nieces, cousins, and close Friends. He was preceded in death by his parents; Randolph and Katie Roberson; his son, Darrel Dewayne Roberson; and his Grandson, Cameron Roberson.

WC Roberson was a man of few words-and those words were usually jokes or humorous comments to and had his own way of showing it. One way or the other, he always kept his family smiling. He didn't show his love in the traditional way, but then... View Obituary & Service Information

The family of Mr. WC Roberson created this Life Tributes page to make it easy to share your memories.

WC Roberson was a man of few words-and those words were usually...

Send flowers to the Roberson family.