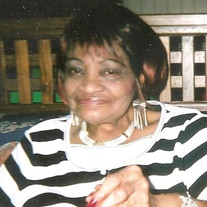 On August 30, 1930, Willa Mae Moore "Maude" was born in Augusta, Georgia to Thurston and Willa Mae Bentley. Maude was the oldest of twelve children. She accepted Christ at an early age and received her education in Georgia. She followed her dream and moved North to Chicago, then to Milwaukee where she met and married Robert English and had eight children. She continued her education at MATC to become a teacher's aide for the Milwaukee Public School System, where she retired. Maude was a fantastic cook, she enjoyed cooking for family and friends. Before working for the school system, she worked in restaurant including the Boston Store. These jobs started her love for cooking. She owned dozens of cook books and thousands of receipts she collected over the years. She loved having family at her house for the holidays and always found room for any guest that came by, they too felt like part of the family, she made them feel that way After ending her marriage with Robert English, she met and married Sammy Moore, who was a reggae musician; he passed away in 1981. Maude loved her grandchildren always taking them on outings such as State Fair Park, Summer Fest, the zoo and the parks. They all looked forward to spending time with grandma, she was truly the Matriarch of this family, loved by all. Although she loved all of her siblings, however, she was very close to her sister almost twin Evelyn Bowers. Over the years, they would call each other to see if they both had the same aches and they would. They would laugh about this and agree they must be twins. She will be dearly missed by her sister. She was preceded in death by four sisters, Queen Ester Bentley, Casanova "Cathy" Bentley, Sadie Bentley, and Betty (Aaron) Hazelwood; four brothers, Thurston (Janice) Bentley, Jackie Bentley, John Tyrone "Ronnie" Bentley, and Rudolph "Rudy" Bentley, and daughter, Barbara McCormick. Willa Mae Moore leaves to cherish her memories: her children, Dianna (Michael) Lloyd, Robert English, Sandra Silmon, Jerome English, Daniel English, Della English, and Emil English; grandson, Chauncy English; two sisters, Evelyn Bowers, and Georgia Allen; one brother, Eton Bentley; son-in-law, Alfred McCormick; sister-in-law, Joanne Bentley, and Jennifer Bentley; and a host of grandchildren, great grandchildren, nieces and nephews. She was a faithful member of St. Mark AME Church, until the Lord called her home.

On August 30, 1930, Willa Mae Moore "Maude" was born in Augusta, Georgia to Thurston and Willa Mae Bentley. Maude was the oldest of twelve children. She accepted Christ at an early age and received her education in Georgia. She followed her... View Obituary & Service Information