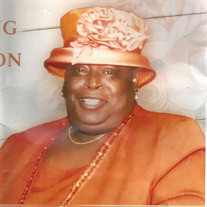 Evangelist Willette Denise Shaw was born on January 9, 1966 in Milwaukee, WI. Her parents are Deacon Joseph L and Evangelist Clara J Beamon. She was born with sickle cell anemia, pneumonia, and spinal meningitis and was not expected to live. However, her great grandmother Clara Butler, lovingly known as Mother Dear prayed and asked God if he would allow Willette to live. Her prayer was answered and Willette would be raised to give God the praise!! Being the oldest of seven children, Willette had to be responsible, helping to make sure that the younger siblings were taken care of. She took that position seriously and thought she was always in charge. She was a leader, dependable, consistent, full of personality, and confident. When she made a commitment she kept it, even when she was not feeling at her best. Willette attended Palmer Street School, 12th Street School and Audubon Middle School. For high school she attended North Division in Milwaukee. While at North, with her suits and heels, Willette's passion for music grew. Her music teacher, Ms. Arlene Skwierawski, who later became her Godmother saw greatness in her student. Willette could move a crowd, and sing the roof tops off a building. She was the star in many play and musicals such as "Jesus Christ Super Star", "The Wiz", and "We Are the Drum". She was also a part of Unity In the Community, and played in "What Will It Take?" under the direction of Gerald Saffold. Later, she became a singer with the Voices of Inspiration. On March 28, 1988 Willette was united in holy matrimony to Deacon Joseph Shaw. In their union she had a daughter their only child, Bionca Denise Shaw on February 1, 1989, even though the doctors had said that she wouldn't be able to conceive. What a Miracle!! Later on Bionca had a daughter by the name of Mya Denise Shaw. Mya was the light of her grandmother's life. They spent a great amount of time together, and their bond was strong. Willette taught Mya many things, and she will forever be grateful. Willette graduated from Milwaukee College of Business with a degree in Business Administration. Over the years, she received many awards and other recognition's for all of her work. Willette was employed with Milwaukee Public Schools for over 20 years. She worked at Craig Montessori, Grandville Elementary, and her former high school North Division. Willette was a daughter, wife, mother, sister, aunt and Godmother to many. She enjoyed coloring books, Disney movies, puzzles, reading, going to the hotel to swim, the Hallmark Channel, traveling, and spending time with her family and friends. Sister loved her some crab legs, chicken Alfredo, candy and a Pepsi. God opened a door for her to become a foster parent to her nieces Cyeasha and Chandelier, as well as a family of cousins by the names of Fatima, Lestia, and Makayla. She also helped with her sister's children, Javone, Britani and Taurus. She loved pouring her time and energy into children. Willette was raised and nurtured under the union of the Holy Ghost. She was baptized in Jesus Name and received the gift of the Holy Ghost at Mt. Zion Assembly Healing Temple of the Apostolic Faith under the leadership of Bishop Dr. Earl and Dr. Cora Parchia. She was very active in the Young People's Department under the leadership of Sis Velma Allen. Willette also enjoyed being in the youth choir, The Glorifiers of Zion, directed by Dr.Annie Oliver. God had shown Willette some things about herself, and with that she was able to reach people from all different denominations. Willette loved God. She had the gifts with he ron her spiritual journey throughout her life. This journey included being an active member at Spirit of Compassion under the leadership of the late Pastor Hannah Roberts, and Love Outreach with the late pastor Elve K. Barton, both located in Milwaukee, WI. She worked within the community at The House of Peace with Brother Booker Ashe, All Saints Catholic Church Choir, and traveled to Italy to sing for Pope John Paul with Ms.Skwierawski. Through her ministry Willette was able to reach all denominations. She got the opportunity to perform in two concerts and record her album entitled "In God's Hand". When people counted her out, God said Not So, and she continued to be her in a miraculous way. Willette departed this life on May 3, 2021. She was preceded in death by her great grandmother Clara Butler, grandparents Amos and Lucille Beamon and Lorine Bivens, her husband Deacon Joseph Shaw, her mother in law Mother Clara Campbell, and her brother in law Jack Rucker. She leaves to cherish her memory her only child, Bionca Coats (Frank); one granddaughter, Mya D. Shaw; her parents, Deacon and Evang. Beamon of Milwaukee,WI; father in law, Gordon Campbell of Arizona; three brothers: Joseph L Beamon Jr., Dennis Chambliss (Suzette), and Julius J. Beamon (Kerry); four sisters: Lorraine Moore (Ike), Rachel R. Beamon, Joy C. Beamon, and Jennifer 0. Beamon, all of Milwaukee, WI; one sister in law, Lisa Campbell of Arizona; and one brother in law, Gordon Campbell Jr. of Milwaukee, WI. She also leaves a host of nieces, nephews, godchildren, family and friends.

Evangelist Willette Denise Shaw was born on January 9, 1966 in Milwaukee, WI. Her parents are Deacon Joseph L and Evangelist Clara J Beamon. She was born with sickle cell anemia, pneumonia, and spinal meningitis and was not expected to live.... View Obituary & Service Information

The family of Mrs. Willette Denise Shaw created this Life Tributes page to make it easy to share your memories.

Evangelist Willette Denise Shaw was born on January 9, 1966 in...

Send flowers to the Shaw family.