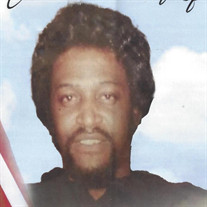 Willie D. Gordon was born on October 20, 1951 to the un ion of Willie O. And Mattie L. Gordon in Elrod, Alabama. Willie was the oldest of five children born to that union. Willie received his formal education in the Milwaukee Public School System at North Division High School in 1968. Willie then joined the United States Marine Corp while in high school 3 days after his birthday, October 23, 1968 and served until June 26, 1970. He affectionately referenced his tour while being stationed in Hawaii. Willie often spoke of his plans to return there some day if the opportunity presented itself. After his selfless service to his country, Willie became a busi- ness owner in his hometown. After his service, he drove a semi truck for a short time and dabbled in cosmetology. He owned and operated two night clubs; The Graduate and Visions Night Club. After which, he decided to follow in the footsteps of his father and run the family's upholstery business; Creative Up- holstery. Willie did not stop there, he also purchased two semi trucks and started truck driving during the later part of his life. Willie loved to fish, travel, had a passion for cars, boats, and loved taking photos. He loved music, loved to sing, and dance. He played guitar, bass, keyboard, and harmonica. He had a knack for being social and could talk to just about anyone. Willie Gordon departed this life on August 21,2021. He was preceded in death by his parents, Willie and Mattie Gordon; great grandmother, Luella Ferguson; sisters Patricia Ann Lewis and Imogene Gordon; and brother Sylvester Gordon. Three uncles Jimmie Lee Ferguson, James Ferguson and Arlester Johnson; two great nephews Omega Gordon and Montel Gordon Jr; and cousin, Ricky Ferguson. He leaves to cherish his memory; son Jeremy-Kristi Grudzinski; one brother Joe David Gordon; 4 grandchildren Ashley, Aaron, Kayden, Reiland Grudzinski; great grandchild- Raylynn McPher- son; one aunt, Geneva (Paul) Saeger and a host of nieces, neph- ews and friends. He will forever be missed.

Willie D. Gordon was born on October 20, 1951 to the un ion of Willie O. And Mattie L. Gordon in Elrod, Alabama. Willie was the oldest of five children born to that union. Willie received his formal education in the Milwaukee Public School... View Obituary & Service Information

The family of Mr. Willie Donald Gordon created this Life Tributes page to make it easy to share your memories.

Send flowers to the Gordon family.