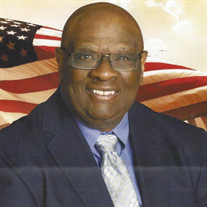 Willie Aurelius Williams was born May 6, 1943 in Hayti, Missouri to the late Aurelius and Carrie Lee Williams. He was the third of three children. As a young boy Willie's parents soon introduced him to life working with them in the cotton fields to help support the family. As he would tell it, that didn't go well because he couldn't keep up. Fortunately, Willie was an intellect with a thirst for knowledge and a love for reading books, which took him to the top of his class at Central High School in Hayti. He earned a scholarship to Lincoln University in Jefferson City, MO. Additionally, Willie's natural leadership skills were cultivated by his devotion to God and his holding of different positions in his church over the years. Willie moved to Milwaukee, Wisconsin later where his mother had relocated. He was drafted by the army in 1966 and took his basic training at Ft. Polk, Louisiana. From there he was sent to Ft. Sam Houston for twelve weeks of medical training and then assigned to Noble Army Hospital at Ft. McClellan, Alabama where he also excelled. With medical training under his belt, Willie was deployed to Vietnam in January 1968 where he courageously served in the 9th Infantry Division as a combat medic, his unit referred to him as "Doc Soul." Known for his calmness in the heat of battle, even while under enemy fire, "Doc Soul" treated wounded soldiers and thoughtfully established triage saving as many lives as possible. The Department of the Army awarded Willie with numerous medals for his heroism including the Bronze Star Medal with "V" device. He was truly an American Hero. After serving in the US Army, Willie returned to Milwaukee and worked at Schlitz Brewery for ten years before he started at Miller Brewery, now Miller Coors, as a Laboratory Technician in quality control. He was a hard worker and took pride in doing his work well. He rarely missed a day of work during his 33 years at Miller. Thanks to his love of language and words -- his favorite book was Webster's dictionary - Willie had a passion for public speaking. His deep announcer voice commanded the stage. He was a member of Toastmasters for much of his adult life. And was called upon to be Master of Ceremonies for different events, including his local union's Dr. Martin Luther King Jr. celebrations held in January. Willie was known for his unique sayings, which his in-laws fondly termed, "Willie-isms". For example, during registration at office visits when asked for his dote of birth he would politely give the correct dote, then pause, and with a straight face soy, "I was born at a very young age." Here is another favorite, "Willie-ism" -- "When I looked in the mirror this morning, I fell in love allover again." Given Willie's humility and self-effacing nature, this comment is yet another example of his great sense of humor. The list goes on and on, but his humor never got old and lifted he hearts of so many people over the years. Having grown up during the racist Jim Crow era, Willie was determined to fight segregation and volunteered with groups like the NAACP and the Milwaukee Chapter of the A. Philip Randolph Institute. He was also on active member of his local union, Brewery Workers Local 9 UAW, as chairman of the Civil Rights Committee. He promoted fair employment and endeavored to eliminate discrimination in the workplace. Willie never met a stranger and quickly mode others feel at ease in his presence. He was not shy about telling others how the Lord hod blessed him. He hod a warm personality and on uncommon sense of humor which captivated his ever-widening circle of friends and devoted family members. Nowhere was this more evident than during his retirement years when he was a member of the Vet's Club at the VA. Twice a week he would participate with and charm the staff- holding court with the other vets. Willie mode lasting friendships with his fellow vets because of their shared war experiences. Willie would pass out biblical devotionals and remind them how God protected him while in Vietnam even despite his repeated exposure to agent orange. That deadly chemical led to the cancer which was the lost health bottle he fought and took his life. In September 1992, Willie and Zettabell (nee Felder) were married. They both found the perfect match for one another and began a life filled with love, friendship, and adoration. Their partnership in marriage was a beacon of light as they shared God's love with family, friends, and through their volunteer work in the community. Willie departed this life on April 12, 2021. He was preceded in death by his parents; his brother, Andrew Lee Williams; his sister, Ruth Earlene Williams; and his son Randall Whitmore. He leaves to cherish his memory, his wife, Zettabell Williams; his nieces, Gretchen "Penny" Williams and Carrie LaVette Fletcher; nephews, Henry "Hank" Williams and John Elvin Williams; and a host of other dear relatives and friends.

Willie Aurelius Williams was born May 6, 1943 in Hayti, Missouri to the late Aurelius and Carrie Lee Williams. He was the third of three children. As a young boy Willie's parents soon introduced him to life working with them in the cotton fields... View Obituary & Service Information

The family of Mr. Willie Aurelius Williams created this Life Tributes page to make it easy to share your memories.

Willie Aurelius Williams was born May 6, 1943 in Hayti, Missouri...